"WHITE KNUCKLE: The Story of The Motorcycle Cannonball"

A brand new film from award winning director Brian Darwas ("The Road to Bonneville" - "A Sweet Sickness: The Flathead Movie"). 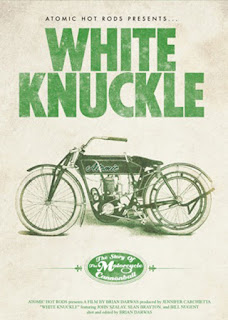 "White Knuckle" follows the triumphs and hardships that face a group of determined riders on the very first
Motorcycle Cannonball, an antique (pre-1916) motorcycle endurance run across The United States.

“I followed some friends as they rode on the first ever Motorcycle Cannonball.  The run was all pre-1916 motorcycles. Some were single cylinder engines, some had no transmissions (just a belt and a tensioner). They started in Kitty Hawk, NC and rode clear across the country to Santa Monica, CA.  Literally "Coast to Coast", on all secondary roads, no highways! . . . and since I like to witness pain and suffering I tagged along and made a movie about the trip.”  -  Brian Darwas

Head on over to: www.hepcat.se and get your copy on DVD!

HepCat Store is our home, rock n roll is our game. We're the heart of retro culture in Southern Sweden and run a store, a record label, give lindy hop classes, put on shows, clubs and art happenings.
Our house, aka the garage, used to be the ambulance garage at Saint Lars insane asylum. To us it feels like home.

This blog is run by the staff at HepTown, HepCat Store and Heptown Records.